Bipolar brain imaging shows how the bipolar brain is different.
The picture below shows a significant reduction in grey matter volume.
It comes from a study of patients with bipolar disorder.
It shows grey matter shrinking prefrontal and temporal regions of the brain. 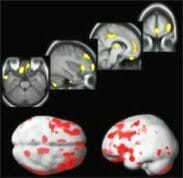 British researchers confirmed this in 2007.
They found people with bipolar disorder suffer from an accelerated shrinking of their brain.
Imaging studies carried out four years apart showed loss of brain tissue in the areas controlling memory, face recognition and coordination.

Don’t panic over your bipolar brain

I know the picture and research above are alarming!
However, just as bipolar can destroy grey matter, lithium re-grows it:

Just four weeks of treatment with lithium increases gray matter volume in the human brain, according to a study by Wayne State University School of Medicine on the bipolar brain. This “regrowth” is due to lithium helping with cognitive functions that are otherwise difficult for bipolar patients.

Think of lithium aiding the brain like a knee brace for a bad knee that allows someone to continue to lift weights and build muscle they otherwise would not be able to.

There are many ways people with bipolar disorder can improve their mental and physical health and nourish the bipolar brain.

What else can bipolar brain images tell us? More and more, research is suggesting that our brain circuits may play just as big a role as our brain chemistry in predisposing some of us to bipolar disorder.

Studies show that bipolar people have different functioning in certain areas of the brain when compared to the population at large. In particular the limbic system shows consistent differences. The limbic system includes:

4 (decreased connections between prefrontal networks and the amygdala)
– the hippocampus
– the cingulate gyrus.

It is the limbic system that controls emotion, motivation, memory and fear – the classic maladaptions of manic depressives.

It may be that a major contributor to the disease is a failure in the way these areas of the brain communicate. In fact, over 25 studies show neurological abnormalities! These abnormalities often include things like loss of volume or loss of plasticity in the major pathways.

“Mental illnesses are brain diseases. Based on biomedical research, there is absolutely no justification for separating out mental disorders from other serious brain disorders. They are brain diseases just as a stroke or a brain tumor is a brain disease.” (Steven Hyman, director of the National Institute of Mental Health.)

However, polls and surveys show that around two-thirds of the population still don’t know that mental illnesses have physiological causes!

For example, I have a friend with cerebral palsy who has been known to kick some of us in the head when she has spasms. Of course nobody blames her or takes this personally. I once lost my temper amongst this same group of people and said a curse word. I was badly manic, off medication and having a full blown episode. My apologies were never accepted and I received hate mail accusing me of trying to manipulate people by pretending to have mental health issues.

It doesn’t make me wish I had CP instead, or make me less ashamed of my behavior, or anxious to somehow make amends, but I do see a double standard and a certain amount of ignorance at play.

Lori Altshuler, director of the UCLA Mood Disorders Research Program, found that the amygdala (a significant brain area for emotional regulation) seems to be significantly enlarged in patients with bipolar illness, along with enlarged ventricles. (Image © UCLA.)

From left: view of a normal brain; patient with bipolar disorder has enlarged ventricles; bright white spots of hyper-intensity associated with bipolar illness.

The next image is a structural MRI with functional MRI data superimposed (this shows areas where the brain is actively working). It shows that the left amygdala, a fear hub, and related structures, activated more in youth with the disorder than in healthy youth. (Credit: Source: NIMH Mood and Anxiety Disorders Program) 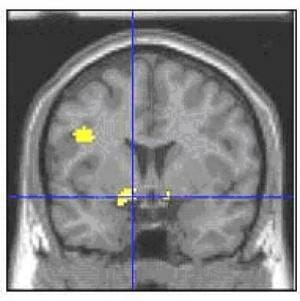 The left amygdala and related structures (yellow area where lines intersect) are part of an emotion-regulating brain circuit where children with bipolar disorder showed greater activation than controls when rating their fear of neutral faces.

Next, we see how brain SPECT imaging can illustrate clear differences between healthy and disordered brains. (Brain Matters Imaging Centers © 2007)

Some commercial entities promote Brain SPECT Imaging (a modality that shows blood flow and function patterns in the brain), arguing it provides graphic evidence that Bipolar Disorder is a biological problem and can be diagnosed at the physical level.

HOWEVER, IT IS IMPORTANT TO REMEMBER IT IS STILL IN ITS EARLY DAYS. THE MEDICAL COMMUNITY DOES NOT ACCEPT BRAIN IMAGING AS RELIABLE FOR DIAGNOSIS OF BIPOLAR, ADHD OR OTHER RELATED CONDITIONS.

Currently, neuroimaging is used to study the brains of individuals already diagnosed with a psychiatric illness, however this will likely evolve in the future.

Even established experts using SPECT and related technologies still use patient histories and self-tests as a diagnostic foundation.

Why is it that these brain imaging techniques, which have already taught us so much, cannot be used to diagnose bipolar?

There are two main reasons:

This means that brain imaging cannot conclusively determine whether someone has a mood disorder.

2. The brain abnormalities found so far are non-specific and can also show up on people with quite different disorders, for example people with other psychiatric disorders such as schizophrenia.

“Through functional brain imaging studies, affective circuits have been identified that mediate manic-depressive illness. Key areas inclide the amygdala and related limbic structures, and regions of the basal ganglia.” Goodwin and Jamison
However, given the problems with diagnosing bipolar, and especially the recent controversy over accurately identifying bipolar teenagers and kids, it is important that research continue.

It is important to understand that disorders commonly known as “mental health illnesses” or psychiatric diseases often have underlying organic brain pathophysiology.  This means that an individual suffering from bipolar disorder is not “crazy”…they have genuine differences in the way their brain receives and interprets certain stimulation.

There is no question that there are measurable differences in the volume of certain areas of the brain, and different patterns in energy usage and blood flow in the bipolar brain when compared to a “normal” control.

Advances in neuroimaging are exciting and I believe a major area of progress in the future will be using advanced neuroimaging to help manage and treat psychiatric illnesses.  The diagnosis of certain psychiatric illnesses will always involve some component of behavioral assessment, as this is the byproduct of what is happening in the brain.  However, neuroimaging will likely be most beneficial when attempting to create new treatment modalities targeting specific areas of the brain in new ways.