The stigma surrounding mental illness hangs like a cloud above the people it affects. Though biological in nature, unlike other diseases, many people living with mental illness remain “in the closet” fearing the discrimination, backlash or alienation they may face from family, coworkers and society at large.

Even the phrase “mental illness” evokes images of homeless people, those incapable of holding jobs or violent perpetrators of mass shootings. Bipolar disorder, in particular, remains one of the most misunderstood.

One of the most persistent myths about bipolar disorder is that people who are diagnosed are not able to keep a job, much less succeed at post-secondary education and have challenging, rewarding careers due to the drastic fluctuations in mood .

While the question of ability and function falls on a spectrum rather than being black or white, the notion that Bipolar Disorder is completely disabling is simply not true.1

James T. R. Jones, Professor of Law at the University of Louisville, Louis D. Brandeis School of Law, has written extensively about mental illness in legal education and academia in general . Kay Redfield Jamison, Ph.D. is a clinical psychologist and Professor of Psychiatry at the Johns Hopkins University School of Medicine . Raheem Hakim is a Harvard University graduate, educator and public speaker. All three of these accomplished individuals have bipolar disorder and are prominent advocates for people with serious mental illness.

Despite the growing number of people who have spoken out about their diagnoses, many are still hesitant to disclose this personal information for fear of being passed up for promotions or being viewed differently than their peers.

The Americans with Disabilities Act (ADA) affords some protection against workplace discrimination, but it is contingent on an employee’s disclosure of their illness, which typically stems from a request for workplace accommodations. This can make the choice to “come out” even more stressful for those grappling with bipolar disorder.

Thankfully, there are organizations committed to securing the civil rights of people with mental illness and changing common misconceptions that the public often holds.

In 2011, the Judge David L. Bazelon Center for Mental Health Law filed a complaint on behalf of a young attorney in Louisiana who was granted a conditional license to practice law due to her diagnosis . As of June 2014, the Department of Justice has informed bar associations across the country that determining a qualified candidate’s ability to practice law based on a mental health diagnosis may be a violation of federal law, stating that applicants should be judged on conduct rather than the condition itself, which is as biological in nature as any other disability that would not be subject to discrimination so long as the applicant is able to perform his or her duties as an attorney . This is extremely encouraging because it takes the focus off judging the diagnosis onto behavior.

With the candor of the aforementioned individuals and the legal push to defend the rights of people with mental illness, a cultural shift has begun that I believe will ultimately normalize Bipolar Disorder.

Television and cinema have contributed significantly in recent years to change perceptions about mental illness through positive representations of characters living with Bipolar Disorder.

Silver Linings Playbook, Homeland, and most recently, Black Box, show viewers the daily struggles of living with Bipolar, as well as the great successes of these characters, both personal and professional.

Black Box, for example, centers on the life of Dr. Catherine Black, a brilliant neurologist with Bipolar Disorder, who struggles to stay on her medication and hides her diagnosis from everyone but her psychiatrist . She is exceptionally gifted, yet fights the challenges that come with the disease.

Characters like these give bipolar disorder exposure. They show people what it is and what it isn’t, which in many ways removes some of the fear and misunderstanding attached to the very name of the illness.

We change stigma by understanding and normalizing mental illness. Where HIV/AIDS was 25 years ago, mental illness is now. The only way to break through stereotypes is through knowledge and interaction.

Patrick Corrigan, Professor of Psychology at the Illinois Institute of Technology points out that, “the most promising way to dispel stereotypes is to meet someone with mental illness face-to-face”. This notion has been proven effective through research.

There is much work left to do, but there is a silver lining in the cloud of discrimination. As we continue to speak openly and honestly about bipolar disorder, we can and will eliminate it the stigma it carries. 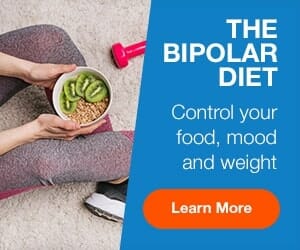 Mental health stigma contributes to many healthcare barriers that prevent people with Bipolar Disorder (and many other diagnoses) from receiving treatment and seeking help, even in cases where safety and wellbeing are at risk. One of the most tragic and preventable consequences of mental health stigma is suicide. Far too many people of all ages struggling with Bipolar Disorder and other mental health diagnoses commit suicide. When these cases are investigated, it is often found that the person never talked to anyone, never wanted to seek help, or if already diagnosed, refused to receive treatment due to shame or embarrassment. Sometimes even a seemingly simple act, like picking up a prescription for a mood stabilizer, is wrought with much embarrassment and avoidance, making the person feel they must hide or seek alternatives to having to pick up their medication themselves.

Talking openly about mental health helps to reduce stigma by normalizing emotional problems as being something that can happen to anyone. Most, if not all, people will experience an emotional struggle, or even meet criteria for a mental health disorder, themselves at some point in their lives. This fact is an indication that stigma is a product of fear because society engages in stigmatizing a problem that will touch all of us at one point or another. Popular media has certainly contributed to mental health stigma, but in recent years, there has been a shift in the manner characters are depicted, particularly “Bipolar” characters. These characters are often portrayed as individuals who take on a struggle and become better from it or experience personal growth through their mental illness. This, in addition to the strong impact social media has had on mental health awareness, will gradually help to reduce and ultimately eliminate stigma and its damaging effects.