It is estimated that one out of every 10 women will experience symptoms associated with postpartum depression after pregnancy and delivery. This includes intense feelings of anxiety, depression, and despair that make it difficult or impossible for them to deal with their daily lives and tend to the responsibilities of being a parent.

The symptoms of postpartum depression can be similar to those experienced in bipolar disorder. Research is currently being conducted to determine a possible link between the two disorders.

Some studies have already indicated that pregnant women with bipolar disorder are more likely to experience postpartum depression, while others have found that the two mood disorders can be easily confused by health care practitioners. This often leads to the wrong treatment plan, which can leave new mothers feeling even more lost and alone. Understanding the differences between postpartum depression and postpartum bipolar depression (bipolar, peripartum onset) will increase your chances of receiving the right treatment.1

It is normal for new mothers to experience dramatic and sudden mood shifts. Feelings of intense joy and love are common, but some women also experience those at the opposite end of the spectrum. It is estimated that up to 70 percent of women experience some of the symptoms associated with the “baby blues” a few days after giving birth. This typically includes sudden bouts of anger or crying and trouble eating and sleeping, along with feelings of self-doubt. In many cases these feelings go away on their own and typically only last a few days.

If you are dealing with bipolar disorder your chances of having postpartum depression are significantly higher than in women that are healthy or have major depression.

According to research, it is estimated that up to two-thirds of pregnant women with Bipolar I or Bipolar II Disorder will experience severe depression after delivery. 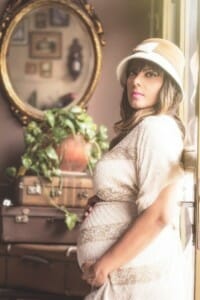 Overall, pregnancy is considered to be a “positive” experience. Bipolar women that are pregnant tend to have a decreased risk for suicide and psychiatric admission due to a lessening of their symptoms. Since bipolar disorder is caused by a chemical imbalance in the brain, early research suggests that the hormones released during pregnancy might have a temporary stabilizing effect. This also helps to explain why women with bipolar disorder are more vulnerable after delivery when there is another significant hormonal shift.

The confusion between the two mood disorders is thought to be due to the similarity of the symptoms, and health care practitioners missing the “manic” aspect of bipolar disorders. A large majority of new mothers experience strong feelings of elation, hyperactivity and an inability to sleep, all of which are also signs of bipolar disorder. Women often fail to report these symptoms to their physicians, and it is not uncommon for them to be missed by their doctors.

When health care providers finally do pick up on the deep lows the bipolar disorder is often misdiagnosed as postpartum depression.

Confusing bipolar disorder with postpartum depression can result in devastating consequences. The wrong medications can cause a new mother’s symptoms to worsen, and in some cases require hospitalization. The frequency of misdiagnosis has led a few health professionals to suggest that all pregnant women be checked for bipolar disorder during their first trimester. At the very least, all women should undergo a mental health screening during the first trimester, assessing for any existing mental health symptoms. This will allow physicians to have a baseline in which mood swings after pregnancy can be measured.2

Being able to detect manic episodes and distinguish them from normal post pregnancy reactions is key in correctly diagnosing the mood disorder.

Postpartum psychosis is often missed even though pregnant women with bipolar disorder are at a higher risk. Part of this is due to its rarity, along with many physicians reluctance to diagnose a patient with this severe disorder. Many health care professionals are also hesitant to prescribe lithium to nursing mothers, even though it is currently the best treatment option.

Postpartum psychosis and PPD are two different mood disorders, and should not be confused. New mothers with bipolar disorder suffering from postpartum psychosis have a significantly higher risk of harming themselves or their babies than women diagnosed with PPD.

According to a review from Stanford University, Northwestern Medicine and Erasmus Medical Center in the Netherlands, postpartum psychosis is usually a result of bipolar disorder and is often misdiagnosed due to the rarity of the disorder and the lack of comprehensive research.

Even though lithium is recognized as the best treatment option for new mothers with postpartum psychosis, there is still an underlying fear that the medication could harm the baby if the mother is nursing. According to Dr. Katherine Wisner, professor and psychiatrist at Northwestern University of Medicine, the potential side effects of the medication are far less severe than leaving the disorder untreated.

A small study of breastfeeding mothers on lithium found that their infants did not experience any side effects. While no one wants to prescribe medication to a pregnant or breastfeeding woman leaving this disorder uncontrolled can result in harm to the infant or even suicide.

Most healthcare professionals are aware that diagnosing and treating this disorder can prevent serious tragedy. The fact that it only occurs in one to two women out of 1,000 makes it difficult to properly diagnose and study simply because healthcare professionals do not come across these cases very often and there is likely a limited availability of research participants available who fit this profile to participate in research studies.

Adding to the confusion regarding proper diagnosis is the fact that there are two types of postpartum psychosis. Some women only experience  postpartum episodes, while others have difficulty with manic mood swings throughout their pregnancy. Women diagnosed with chronic bipolar disorder should be treated throughout their pregnancy, and be closely monitored for any changes to their body’s metabolic rate. This will affect medication dosage.

Acute onset postpartum psychosis is harder to detect, since it occurs during the time most women experience PPD. The symptoms are also more severe, with new mothers suddenly appearing confused, disorganized and even delirious. Many women being treated for sudden postpartum psychosis report having dark delusions that makes them want to hurt themselves or their babies.

With bipolar disorder occurring in one to five percent of women, postpartum psychosis does present a real threat to new mothers and their infants. Safe and effective treatment is available, and it is critical for both mothers and their babies.

There is a definite overlap between cases of Postpartum Depression and pre-existing Bipolar Disorder (i.e., Bipolar Disorder that was present prior to the woman becoming pregnant). New mothers confront stressors that are positive, but represent a major life change nonetheless, in the form of erratic sleep schedules, elation, and even excess energy. These behaviors are considered adaptive since caring for a newborn requires the utmost energy and stamina; however, these behaviors are very similar to the symptoms of mania or hypomania. The same applies for symptoms of Postpartum Depression, which can be simply, as the name implies, depression after delivery, but it can also be a case of depression resulting from pre-existing Bipolar Disorder. It is definitely a complex diagnostic situation to disentangle.

If the new mother was not thoroughly assessed during the first trimester, it may be very difficult for her OB/GYN to detect preexisting Bipolar Disorder. This can create a risky situation for the mother’s and the child’s well-being because hormonal shifts after delivery can exacerbate symptoms. At this point, if Bipolar Disorder is identified and the mother is nursing, taking a mood stabilizer may be approached with fear and caution on the part of the physician and/or the mother.

Screening for mental health problems is an effective solution, or at least, the best preventative measure to take in the event the mother displays symptoms after delivery. In addition, screening during the first trimester can help to signal to the physician that the woman needs an intensive therapeutic treatment plan that must be implemented during the pregnancy and after delivery. Services such as weekly psychotherapy, exercise and nutrition support, peer groups for new mothers, and other psycho-social interventions can provide additional support to women at risk (or with a pre-existing mental health condition) in order to alleviate stress, teach coping skills, and prevent the onset of symptoms.