Bipolar Type 1 is considered the most severe form of this illness.

According to the DSM 5, Bipolar I Disorder is characterized by one or more manic episode or mixed episodes (mixed episodes involve mania and depression) accompanied by episodes of depression alone (without mania or hypomania).

This is the most distinguishing, defining element of Bipolar I, (i.e. at least one truly manic episode).

A person may display psychotic symptoms such as delusions of grandeur or hallucinations.

In these cases, the condition is described as Bipolar Disorder I with psychotic features.

Bipolar I episodes of mania are so severe and debilitating that some experts use the term “raging Bipolar”.

A key point is “the symptoms are severe enough to disrupt the patient’s ability to work and socialize.”

The nature of raging Bipolar has been captured in this Psychcentral discussion of Bipolar types with a focus on how Bipolar I is actually experienced.

Someone suffering from Bipolar I can have great difficulty functioning. You could have trouble holding down a job or maintaining a healthy relationship and typical, every day interactions with family and friends.1

Some symptoms you might experience during a manic episode include:

Bipolar I is the “classic” or “textbook” version of the disorder with serious and damaging episodes of both mania and depression.

7. Becoming easily distracted or unable to finish one task or activity.

It is the tendency to become involved in risky or reckless behaviors that makes a manic episode the most dangerous to a patient. Driving carelessly, spending excessively and engaging in unsafe and reckless sex can have serious consequences that just do not matter to you at the time.

In a severe manic episode a person can lose all touch with reality. Left untreated a manic episode can last anywhere from a few days to several years of recurring episodes. Most of the time these symptoms will last for a few weeks or a few months.

The key difference between Bipolar I and Bipolar II is the presence of mania versus hypomania. It is important to understand this distinction in detail. See this explanation of Bipolar I mania types from Brown University.

Bipolar I mania is often followed by a depressive episode. It can come within days or not pop up for several weeks or months.

During a depressive episode you may feel drained, in deep despair, guilty for no reason, worthless and irritable. 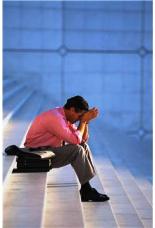 Activities you normally enjoy will hold no interest. You may experience sudden weight loss or weight gain and uncontrollable crying spells. At your lowest moment you may even have thoughts of suicide.

Again, possible consequences mean nothing to the afflicted person. These depressive episodes can last for years, which is why Bipolar I is often mistaken for chronic depression.

Many people with Bipolar I Disorder can enjoy periods where they don’t experience any symptoms in between episodes. These individuals are often able to go about their life, work, participate in family life, and socialize like anyone else. A minority of patients have rapid-cycling symptoms between mania and depression. In extreme cases symptoms of mania and depression can even alternate in the same day.2

The exact cause of Bipolar Disorders is not precisely understood. It seems to be a combination of 3 things:

2. Chemical imbalances in the brain.

3. Stress and triggering events that somehow “activate” an inherited or genetic predisposition to the disorder.

Are Bipolar I and Bipolar II treated differently?

When you go for an assessment, just like with any other illness, you will be asked about family history. A close relative such as a parent with suspected or diagnosed bipolar disorder greatly increases the likelihood other family members also having the illness.

If you are concerned, take a Bipolar test.

So far, there does not seem to be any way to prevent the illness, but you can prevent some episodes of mania or depression once a doctor establishes that you do in fact have Bipolar I Disorder.

Bipolar I almost always requires the person to take medication for effective management. Don’t worry – stability and sanity is SO worth it!3

The key factor is stabilization. Regular therapy, a healthy diet, exercise and – MOST OF ALL – mood stabilizing medications such as
lithium can greatly reduce the frequency and severity of Bipolar I episodes.

Bipolar I Disorder is truly one of the most confounding of all the mental health disorders characterized by extremes in functioning and presentation. I feel that it is a unique disorder in that the affected person can transform from a highly productive, intelligent, and insightful individual, to completely debilitated and unable to care for themselves.

People with Bipolar I Disorder are known to be some of the most talented, artistic, and well-versed people, often being gifted in music, writing, public speaking, or similar fields. The periods of severe mania and depression are a lifelong struggle for these individuals, but their level of functioning in between episodes serves as a significant advantage to them. This is when these individuals are able to conceptualize and understand the disorder and take effective action towards prevention. The disorder, in a sense, allows for these periods of greater clarity where the Bipolar person can find their way towards wellness and healing.