Discover the inositol and bipolar connection!

Many so called natural cures are just Internet snake oil. However, inositol is one dietary supplement that even conservative medical experts agree to have positive benefits, although the inositol and bipolar connection is confusing.

Though it has shown effectiveness in conditions associated with bipolar disorder, the value of inositol for treating bipolar itself is unclear.

What do we know about inositol and bipolar?

Research has shown a lack of inositol in bipolar patients.

Research has also shown that supplementing with inositol reduces some bipolar symptoms, for example depression.

4 (inositol may help with bipolar depression, but more studies are needed) It also is effective in common comorbid conditions such as panic disorder and OCD.

So why such positive benefits with inositol and bipolar?

Inositol is a naturally occurring isomer of glucose It is classified as a member of the vitamin B complex. Sometimes people refer to it as B8, but it is not really a vitamin itself.

Inositol is a natural chemical compound present in the human body and in certain ordinary foods. It is a direct precursor of phospholipids which are a major component of cellular membranes.

What does this mean?

Phospholipids are fat-soluble, naturally-occurring molecules that help make up our cellular structure.  Both inositol and the phospholipids play a major role in signal transmission for many neurotransmitters and hormones. There is growing evidence that lithium and fish oil may also exert their beneficial effects by regulating these same signal transmissions.

Inositol is important for regulating serotonin and insulin, and breaking down fats and reducing blood cholesterol. 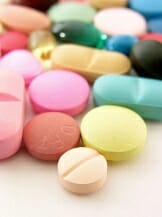 There have been several clues alerting researchers to the connection between inositol and bipolar.

When postmortem brain tissue has been examined from deceased bipolar patients, low inositol levels have been found in the frontal cortex, as well as in lymphocytes. (Lymphocytes are a type of white blood cell responsible for immune responses)

Another clue to a connection is that inositol plays a major role in the same brain and nerve systems that respond to mood stabilizers.

There have also been reports of reduced inositol in the cerebrospinal fluid (CSF) of some bipolar people.

The benefits of inositol l have been documented in a number of clinical research studies. These include:

1. A 1995 study showing improvements in unipolar and bipolar depression.

2. A 2001 study showing inositol to be as effective as fluvoxamine (Luvox) for the treatment of panic disorder.

3. Another study proving inositol helps in panic disorder, this time from 1995.

4. A 1996 study showed inositol is effective in depression, panic, and obsessive-compulsive disorder.

Or there is one giant mega-study, Inositol as a treatment for psychiatric disorders: a scientific evaluation of its clinical effectiveness. This mother of all studies collates the research and summarizes a lot of the current evidence on the benefits of inositol.

It comes out in favor of using inositol for depression, OCD, and panic disorder, but is not able to draw a conclusion where bipolar disorder is concerned. The inositol and bipolar connection seems to exist but is still unclear.

SINCE THIS PAGE WAS ORIGINALLY CREATED, I HAVE FOUND MORE RESEARCH THAT SUGGESTS THE OPPOSITE MAY BE TRUE, AND THAT SUPPORTS A Low inositol diet for bipolar disorder.

At this time the evidence appears too mixed to suggest a definite and positive inositol and bipolar nexus.

4 (more data is needed for definitive inositol recommendations in bipolar)

So someone with bipolar disorder probably need not begin taking high doses of inositol, but if you are already taking it and getting positive results, the negative evidence is not so strong that you should discontinue, especially if it is helping you with a co-morbid condition such as OCD or panic disorder.

I will continue to update as the evidence around the benefits of inositol for bipolar disorder becomes clearer.

Learn about other natural treatments for bipolar disorder

Inositol is naturally present in our bodies and in fruits, nuts and cereals.

The normal diet usually contains approximately 1 gram per day of inositol. The therapeutic level required to obtain the benefits we have described for inositol and bipolar is 6-20 grams per day, with 12-18 grams probably being the range to shoot for.

Inositol is present naturally in citrus fruits such as oranges, and in nuts, seeds, cereals with high bran content, and legumes. It is a great idea to increase your consumption of these foods. However, it is impossible to get 12-18 grams per day of inositol through eating nuts and oranges.

It would be necessary to take an inositol supplement. These can be purchased online or at your local health food store. It often comes in a powder which can be sprinkled on food, mixed in juice or with water, or just eaten directly. Capsules are also available.

Start with 500mg per day and increase slowly to 12g over a period of 4 weeks, going up 500mg per day. This will give your body a chance to adjust and for you to see how inositol affects you.

Then try the 12g dose for 3 months and see if you experience positive benefits. You may then wish to increase further to 18g. You can also cut back a little – fine tune it so that you get the optimal result for you.

Some people have had positive results with as little as 2 grams.

Side effects and cautions

However, it is critically important to discuss the supplementation of inositol (or any other supplement for that matter) with your psychiatrist.  It is important that they know every active substance that you are taking.

Are there any side effects to watch for that might these outweigh the benefits for inositol and bipolar?

Inositol is water soluble. This means that even at the high end of the dosage range (say 18 grams), it will not build up in your body and become toxic. Any used inositol is simply excreted by your body in the normal way.

The main side effects are a bit yucky but nothing dangerous – gas and diarrhea. For some people this never happens, for others the side effects clear up after a few days once the body adjusts. Some individuals don’t experience these side effects until they start getting towards the high end of the dosing range.

They could try cutting back and, just with all medication, try to find that “sweet spot” with maximized benefits and minimized side effects.

Some side effects may actually be positive. There is speculation that through regulating serotonin, inositol may improve sleep and relieve insomnia – always a big plus for bipolar people. However, this is just a guess – so far there are no clinical studies to prove this.

CAUTION TO PREGNANT WOMEN: Inositol may cause contractions because it has an intimate relationship with oxytocin, a key uterine stimulator. There is controversy over the evidence, but this is too important to gamble on. We strongly urge women who are or could become pregnant to consult a doctor before taking inositol.

Other than the risk for pregnant women, the side effects are mild and do not seem to outweigh the benefits of inositol for bipolar disorder.

Some websites say that lithium and inositol should NOT be taken together but do not provide a reference for this information. Ignore it! This is not true.  In fact, lithium works via the inositol pathway and decreases intracellular inositol levels.

Inositol and lithium CAN be taken together, and there are two interesting research studies you should know about:

1. A 2006 study reported that among 17 bipolar patients already on lithium or Depakote, compared with those on a placebo, there was a trend for more subjects on inositol to show improvement in depressive symptoms; this was especially true in those with high baseline levels of anger and hostility.

This means that even if you are already getting a positive result from lithium or Depakote, there may be added benefits of inositol for bipolar disorder if you take it in combination with your existing medications.

2. Treatment with lithium can trigger or worsen psoriasis. In a 2004 double-blind study, supplementing with inositol (6 grams per day) for ten weeks significantly improved lithium-induced psoriasis, but had no effect on psoriasis in people who were not taking lithium.

So researchers are working with people taking both inositol and lithium and finding there are still benefits of inositol. It is not true they cannot be taken together.

However, there is one factor that may be worth considering. People with chronic renal failure sometimes show elevated levels of inositol.

8 (however, these increased levels are thought not to be related to an inability to excrete inositol) Overdosing on lithium can cause renal failure.

Inositol (or myo-inositol) is a carbocyclic sugar that is abundant in the brain and other mammalian tissues.  It mediates cell signal transduction in response to a variety of hormones, neurotransmitters and growth factors.  Its supplementation is usually encouraged in metabolic syndromes and diabetes.

However, inositol might balance certain chemicals in the body to possibly help with psychiatric conditions such as panic disorder, depression, and obsessive-compulsive disorder. The available data does not strongly support the supplementation of inositol in bipolar disorder, and the supplement has been shown to be less effective than other available medicines.9 (inositol is not as efficacious as risperidone in bipolar depression)