What is thyroid and Bipolar connection?

According to Doctors Goodwin and Jamison in Manic-Depressive Illness: Bipolar Disorders and Recurrent Depression: “Thyroid dysfunction associated with bipolar disorder is a significant problem”.

The thyroid is a relatively large, butterfly shaped gland in the neck. A normally functioning thyroid uses iodine and the amino acid tyrosine to produce exactly the right amounts of the important thyroid hormones thyroxine (T4) and triiodothyronine (T3).

Through these thyroid hormones, the thyroid controls many important bodily functions, including:

The thyroid hormones produced by the thyroid gland are responsible for how every
cell in your body converts oxygen and calories into energy. However, sometimes the thyroid malfunctions and does not produce the very precise and balanced amounts of T3 and T4 needed for optimal health.

There are two ways things can get out of whack:

People who have a thyroid gland that is not functioning properly are more likely to have bipolar disorder, panic disorder, OCD, major depression, and/or a whole range of other mood disorders than the population in general.

So what DO we know about the thyroid and bipolar relationship?

Research such as the STEP-BD clinical study has shown that:

ALL people suffering from bipolar disorder should also be carefully screened by their doctor(s) for the other mental and physical health complications that commonly occur along with bipolar, for example substance abuse, anxiety disorders, heart disease, diabetes and so forth.

However, based on the information above, it is particularly important that ALL WOMEN WITH BIPOLAR II ALWAYS BE CHECKED FOR AN UNDER-ACTIVE THYROID. 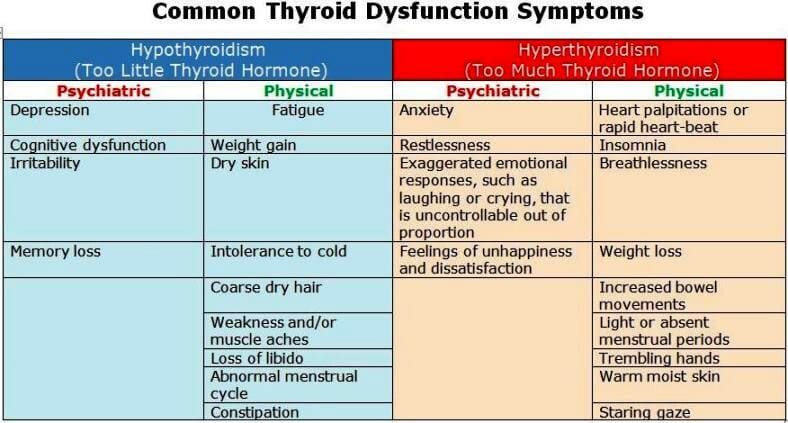 Note that in the table above, I have included symptoms of overactive thyroid (hyperthyroidism) as well. However, there is relatively less evidence of a strong link between hyperthyroidism, but it has been described.

5 (they found a clear association between hyperthyroidism and BD)

The link between bipolar and hypothyroidism is supported by consistent and plentiful data.

Therefore, we will focus on underactive thyroid and bipolar as this is of most relevance.

What is an “under-active” thyroid?

This is where things get extremely interesting for people with bipolar disorder, but also a tad confusing. The problem is that the whole notion of what is an adequate, “normal” level of thyroid hormone is increasingly debated and controversial. 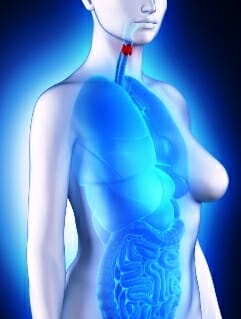 Usually when you have blood work done, your doctor will base treatment decisions on what the lab where your blood was tested has flagged as “out of range” versus “normal” in their report.

Currently, the majority of US labs report the “normal” reference range for the Thyroid Stimulating Hormone (TSH) as being between 0.5 – 5.0.

However, in January 2003, the American Association of Clinical Endocrinologists, started advising doctors that a more accurate range would be a range of TSH level from 0.3 – 3.0.

This means that based on the latest medical evidence, millions of Americans have low thyroid function in the TSH range of 3.0 – 5.0 but are not getting identified in the lab reports relied on by their family doctor.

Using the updated range would put 20% of the population as hypothyroid, as opposed to just 5% as measured now. Some experts even believe the correct range should be even narrower, at 0.4 – 2.5. (You can read a simple description of the research on www.About.com’s Thyroid Testing webpage.)

THIS MEANS YOU COULD BE HYPOTHYROID, DESPITE WHAT A BLOOD TEST SAYS.

On top of the confusion around testing ranges, studies have shown that many people
with bipolar disorder, particularly those who are in depressive episodes, have “sub-clinical” low levels of thyroid hormone.

They do not meet the “official” diagnosis of hypothyroid with a TSH of over 5.0, but their TSH is still at the low end of the scale.

It boils down to this: thyroid malfunction is a very important complication in bipolar disorder, but is commonly overlooked.

It is imperative that you have your thyroid function tested immediately if you have been diagnosed with bipolar disorder.

If your thyroid function level is low but “normal” (that is, if your TSH is in the range of 2.5 – 5.0), or definitely low by even the out-dated standard (TSH over 5.0), then starting thyroid supplementation immediately is likely to be highly beneficial.

(This was MY problem. After being diagnosed with bipolar disorder I had good results from taking a mood stabilizer but my physical health was definitely off. Even though my TSH was supposedly normal at 3.0, my doctor worked with me to get it down to 1.0.

The result? In my 50s I am in the best shape of my life because my thyroid AND bipolar disorder are both finally being treated together.)

Also please understand: in modern developed nations there is so much iodine in our diet that thyroid malfunction is not related to malnutrition, and you cannot boost your thyroid back to normal through natural supplements based on vitamins or minerals.

If you are low on thyroid, you will need to take thyroid hormone supplements to correct the problem.

Testing your thyroid function and augmenting thyroid hormones where necessary should be the first step in treatment of bipolar depression, right alongside prescribing a mood stabilizer. However, lithium can actually induce hypothyroidism as well.

My own thyroid and bipolar experience has been the wonderful discovery that by taking thyroid hormone supplements and a mood stabilizer (both generics from my local CVS), I have transformed my mental and physical health at a cost of only $9 per month!!

An excellent book for the lay reader is Thyroid Power by Richard Shames, M.D. and Karilee Shames, R.N., PH.D.

It describes how fatigue, weight gain, depression, high cholesterol, low sex drive, and a host of other difficulties are often due to low thyroid. It also explains how to talk to your doctor about misconceptions about hypothyroidism, and what is really “normal”.

Also see this expert for simple explanation of the thyroid dysfunction / bipolar disorder relationship, which concludes:

Thyroid dysfunction can lead to many systemic effects.  Hypothyroidism is classically associated with fatigue, increased sensitivity to cold, constipation, dry skin, and weight gain, among others.

Thyroid dysfunction can have many psychiatric overtones and has been shown to be associated with bipolar disorder.  However, one of the mainstays of treating bipolar, lithium, can be a potent inhibitor of the thyroid gland and induce hypothyroidism.

It is important that a patient’s thyroid function be evaluated prior to initiating lithium treatment and that it be monitored regularly while lithium is being taken for bipolar disorder.