Bipolar depression treatments cause a lot of confusion.

Also, to further complicate things, when a person stabilizes and is no longer experiencing either acute depression or acute mania, their bipolar maintenance treatment will probably be different again.

When we say “bipolar treatments,” we first and foremost mean bipolar medications.

When the FDA approves drugs for the treatment of bipolar symptoms, often the FDA will stipulate whether the drug is for treating depression or mania.

For example, Lamictal is very effective as a bipolar depression treatment, whereas lithium is more effective for treating bipolar mania.

Abilify is an example of a drug that is approved for treating mania, but NOT BIPOLAR DEPRESSION.

3 (Abilify effective in treating bipolar I)

There are three very important facts that you MUST understand:

Some medications are much better for treating either bipolar depression or bipolar mania, but not necessarily both.

2. Regular antidepressants such as SSRI drugs like Prozac are not particularly effective for treating bipolar depression, PLUS they can cause a person to “flip” into mania.

4 (SSRI’s should not be used as bipolar monotherapy)

3. Most people with bipolar disorder spend MUCH MORE time being depressed than they do being manic.

Regardless of your experience of bipolar disorder so far, even if it has been almost overwhelmingly manic; if you are really bipolar (as we know, a great many people are misdiagnosed), sooner or later you will also experience an episode of depression.

According to Consumer Reports and the British Medical Journal (BMJ), the best treatments for bipolar mania are:

However, the best treatments for bipolar depression are:

A new drug for bipolar depression called Latuda (generic name Lurasidone) was approved for treating Bipolar I depression by the FDA in July, 2013. Lurasidone is a powerful antipsychotic that has serious side effects, especially in relation to weight gain and likely contributing to diabetes and heart disease. However, it is less potent for weight gain than almost all of the other atypical antipsychotic drugs and, in comparative terms, has a more benign side effect profile.

The combination of Lamictal and lithium is emerging as a “gold standard” option in bipolar maintenance treatment because it achieves an effective balance of treating both poles of the illness.

Of course, there is more to treating bipolar disorder than medication!

Cognitive behavioral therapy (CBT) and other forms of “talk therapy” have been shown to help. 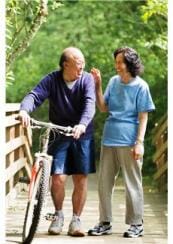 Also, educational oriented therapy that informs people about bipolar disorder and the need for medication is known to improve outcomes.

However, the big news is the effectiveness of Interpersonal and Social Rhythm Therapy (ISRT) or simply Social rhythm therapy. This emphasizes following a regular daily routine of beneficial practices such as regular sleeping hours, daily exercise, scheduling daily activities for every day, and maintaining a healthy diet on a daily basis.

I KNOW YOU MAY NOT WANT TO HEAR IT BUT . . . We know that one of the most effective bipolar depression treatments is exercise. I know you may resist this but the science is now beyond doubt. Just do it!

Another critical element is The Bipolar Diet.

8 (diet IS important in bipolar)

What else fights depression and makes people happier?

Try these 3 simple techniques which are all backed up by solid research:

1. Gratitude – all you need to do is write down three things you are grateful for every day. This combats depression, increases optimism and was even shown to improve physical health.

2. Give – Even small acts of kindness are known to rapidly and significantly boost happiness.

3. Gloat – write down 1 – 3 things each day that have gone well. These do not have to be big things – even sticking to your schedule counts.

A common problem experienced by people with bipolar disorder is that they may have been under medical care for a while and are taking medication, but are still depressed.

Why does this happen?

Sometimes it is due to poor medication compliance. If someone isn’t taking ALL of their medication at the RIGHT DOSE AND THE RIGHT TIME, then they are very likely to experience mood swings, including episodes of depression.

Treating bipolar depression is a critically important aspect of the disease process, as the majority of time patients are struggling with depression rather than mania. A clinical practice update published in 2016 shed light on a reasonable treatment algorithm for bipolar depression (in patients not already receiving an antimanic drug) – using some of the most up to date information.6  The treatment algorithm is as follows: