Temper tantrums are often a part of raising children. After all there is a reason for the phrase “the terrible twos” and “teenage angst”. However, some parents aren’t just dealing with anger caused by frustration or their children not understanding why they are being told “no”.

The anger displayed by their child can be destructive and even frightening. Worst of all, it doesn’t seem like a “phase” the child will grow out of.

While your child’s anger could be caused by a number of mental health conditions, it can also be an early sign of bipolar disorder.

Is It Bipolar Or Something Else? 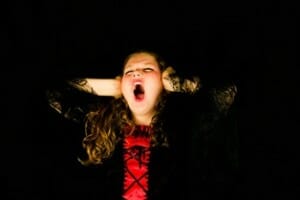 This can lead to problems getting the right diagnosis for children, and also means it could take years before kids have a treatment plan that actually works.

In fact the American Psychiatric Association does not believe that there is currently enough evidence to state that Bipolar Disorder exists in children, and the Diagnostic and Statistical Manual of Mental Disorders (DSM-5) often used by mental health professionals has included an additional category for kids that are excessively irritable and/or aggressive. It is referred to as “temper dysregulation disorder with dysphoria” (TDD).

Even though opinions vary if kids are really dealing with a form of bipolar, the fact remains that their sometimes uncontrollable anger is more than “normal” tantrums. What parents and their children’s doctors do need to consider is if it is ADHD, or an anxiety or other mood disorder. Sometimes, the symptoms can be similar to those associated with bipolar and this can cause additional confusion when it comes to treatment.

Adding to the confusion is the fact that some illnesses can co-exist with bipolar. Recent studies are starting to show that some children diagnosed as having bipolar are also trying to manage ADHD. They may have problems controlling their actions and concentrating on tasks at hand, even though they are not experiencing a depressive or manic episode.

Anxiety disorders are also seemingly more common in children diagnosed with bipolar. Whether this is a medical fact or physicians are just trying to find a cause for a child’s abnormal anger is still being studied. The best advice is to document all of your child’s symptoms, no matter how minor they may seem, so your child’s mental health provider has all the information they need to try and come up with the right diagnosis.

Remember: Just because your child has issues with anger doesn’t necessarily mean that they have bipolar 1 or 2.

Signs of Bipolar Anger in Kids and Teens

There are some signs that could indicate your child’s rage shouldn’t be considered “normal growing pains”. It also helps to differentiate Bipolar from ADHD and other mood disorders.

Chances are your child is exhibiting anger during mania. Unlike older teens and adults they often do not have feelings of euphoria, instead they are constantly irritable. This can be especially true in the mornings.

It is important to note that just because your child is “grumpy” in the morning doesn’t necessarily mean that they need to be treated for bipolar.

Along with irritability, children often display irrational anger that is usually directed at parents or other adults in their lives. They can become physically aggressive, and this can be frightening for everyone involved.

Other signs that it could be what is loosely termed as “bipolar anger in children” can include,

Children that are trying to manage bipolar often lack fear and aren’t afraid to try anything, no matter how reckless. This can lead to injury to themselves or others, and if they are told “no” to something they want to do rage can take over.

As you can see, these symptoms are similar to those associated with other behavioral or mood disorders. The main difference is that the anger lasts much longer if the child has a type of bipolar disorder.

How to Help Your Child Overcome Anger Due to Bipolar Disorder

When bipolar is involved everything changes, especially in younger patients. Structure and discipline are important to a child’s healthy development and it can be especially true with bipolar.

Having a set schedule or routine is often an important part of bipolar treatment.

It is possible to have a “happy” family, even if a child has been diagnosed with bipolar disorder.

It won’t happen overnight and will take a lot of work on every family member’s part, but it is possible. Do Not be afraid or ashamed to ask for outside help. Individual therapy and family counseling can be lifelines for parents and other children in the home.

Just remember to keep your “emotions in check” and set boundaries. There are support groups in many cities for families with a child diagnosed as “bipolar” and they will let you know that you are not alone.

Most importantly, your child still loves you even during an episode.

When a child with Bipolar Disorder struggles with severe anger, the consequences can be serious, as these children can eventually end up getting in trouble in school, face suspensions or expulsions, and even be at greater risk of legal problems by the time they reach adolescence. It is not that the child/adolescent with Bipolar Disorder has any criminal intent, but it is their inability to control impulsive anger reactions (that could even escalate to violence, depending on the person/situation they are confronted with) that could get them into circumstances far worse than they may anticipate. Not all children with Bipolar Disorder will display anger problems outside of the home environment. In fact, many children with the disorder could be well behaved in school, but act out and demonstrate symptoms at home. This is one of the distinctions between ADHD and childhood Bipolar Disorder, as children with ADHD often display symptoms both at home and at school. Bipolar children often attempt to ‘hold it together’ in front of others followed by having ‘emotional meltdowns’ as soon as they are in the comfort and familiarity of their home. Regardless, untreated anger problems among this population of children will likely transfer to other settings outside the home and this can cause very serious consequences to the child’s wellbeing and that of others.

Children struggling with severe Bipolar Disorder-related anger, whether verbal or physical expressions of anger, must receive intensive behavioral interventions, ideally delivered by a therapist. In this scenario, when a child with Bipolar Disorder is expressing poor anger control, the parents should receive just as much counseling and intervention as the child. The reason for this is because parents are responsible for implementing these interventions in the home environment. The child will be taught various strategies to self-regulate emotions, control impulses, and self-soothe, but parents must do the monitoring, positive reinforcement, and additional exercises and interventions at home. With the proper treatment, these children can actually be at an advantage and have some good coping skills under their belts, something that their peers may not learn until much later.