I hope you have found the right bipolar medications for you! When I was first diagnosed with bipolar disorder it took a long time for me to fine tune my own meds.

Not all bipolar medications are created equal, and finding the right bipolar drugs for YOU may be a long and difficult journey.

Here at Bipolar-Lives.com we have had our own struggles with bipolar drugs.

We understand the challenges involved in finding – and fine-tuning – the bipolar disorder medications that are best for YOU.

We have also taken the journey and understand how difficult it can be to get the right bipolar drugs.

Don’t worry – you are NOT alone! Get the facts from someone who has tried just about all the bipolar drugs out there.

Someone who understands the REAL impact of side effects, medical expenses, and the struggle to communicate with friends, family, and doctors.

My quest for the right bipolar drugs was shorter than it is for many people, but it was still too long. I tried atypical antipsychotics (Geodon was especially disastrous, also Topamax and Depakote – a side effect nightmare) before “coming home” to lithium.

I have family members using the Lamictal and lithium combination and can see why some experts consider this to be emerging as the new gold standard in bipolar medications.

Bipolar disorder is characterized by mood swings, and this means that the primary goal of bipolar medication MUST be mood stabilization.

These are drugs that regulate mood swings so the extremes of depression and mania may no longer occur.

Many of the most prescribed bipolar medications today are NOT mood stabilizers.

Instead they address ONLY depression OR ONLY mania.
Some may even TRIGGER mania or depression.

The most challenging aspect can be finding the right bipolar drug for the current phase of the illness. For example, there may be a difference between what meds are required for treating an acute mood episode, versus what is required for maintenance treatment.

Furthermore, episodes of depression may require a different treatment than when you are experiencing mania. Often this is done with “medication cocktails” – combinations of mood stabilizers with other bipolar approved medications such as certain antidepressants and/or anti-psychotics.

Lithium is the most researched of all bipolar disorder treatments. Studies indicate it is best for prevention of mania – BUT lithium is now known to be a WEAK treatment for bipolar depression. This is important since we usually spend more time in depression than in mania.)

First line monotherapy drugs for patients with bipolar I depression who are not currently taking an anti-manic drug are generally quetiapine or lurasidone.

6 (using lamictal in bipolar I)

Hence, a potentially effective maintenance treatment for someone with bipolar disorder and a depressive bent would be the Lamictal/Lithium combination..

In fact, the lithium/Lamictal combo is one of the most effective treatments at controlling bipolar behavior for many patients.

There are some other medications available that come in and out of fashion. However, our major focus will be on using mood stabilizing drugs as the first line of treatment for bipolar symptoms.

Obviously, the primary goal of taking medication is to first and foremost treat bipolar symptoms.

When a person has manic-depressive illness, there are 4 main things they need from their bipolar medication:

These factors suggest that the traditional approach of using a proven mood stabilizer such as lithium is still the wisest approach.

(If you are resistant to the idea of mood stabilizers, check out an authoritative source on bipolar medications such as the Practice Guideline for the Treatment of Patients With Bipolar Disorder.)

For people with this mood disorder, it is more common to suffer from symptoms of depression than mania.

While the fallout from manic episodes can be particularly destructive, and it is the occurrence of mania that characterizes this disorder, most bipolar people will spend more time struggling with their symptoms of depression than mania.

Also, research shows that depression is harder to treat than mania in bipolar disorder. Unfortunately, this is something many of us found out the hard way.  Medical professionals often still misdiagnose bipolar disorder as depression.

For these reasons, many bipolar patients  are given antidepressant drugs. DON’T TAKE THEM UNLESS YOU ALSO TAKE A MOOD STABILIZER AND/OR HAVE A DETAILED JUSTIFICATION FROM YOUR PSYCHIATRIST! The latest research suggests that antidepressants are either ineffective or downright dangerous if what you really have is manic-depressive illness.

5 (some antidepressants can be used, others should absolutely be avoided)

There is not any reliable evidence that supports the continuous use of an antidepressant to prevent further episodes of bipolar depression. In fact, there is a definite risk of the medication triggering a switch to mania.

SSRI drugs are NOT effective bipolar medications. However, “Benzo” antidepressants such as Klonopin, Xanax, Valium, or Ativan may be beneficial in treating anxiety and panic.

You will want to steer away from atypical antipsychotics until you have tried the traditional frontline bipolar medications such as mood stabilizers and anti-convulsant drugs. Many of them are listed for easy reference at the bottom of the page.

Although these drugs have recently become fashionable bipolar medications, and do have some research to support their effectiveness, there is a lot of debate about the conduct of the drug companies and the doctors they paid to conduct these studies.

Also, in some US states there have been lawsuits and legal settlements. There is evidence that these drugs have been pushed in inappropriate ways and have severe side effects that consumers are not suitably warned about. Zyprexa is the biggest culprit.

Abilify is popular because some believe it does not have these same weight gain problems (although it does) and there is now evidence to support its effectiveness for treating both mixed episodes and bipolar mania.

However, the latest atypical on the market – Latuda – has much milder weight gain side effects and is both unusual and very welcome since it is FDA approved for treating bipolar depression.

Use this section of the website to discover the truth about YOUR bipolar medications.

Learn the facts you need to discuss medication with your medical team and loved ones.

Discover the secrets to:

2. Understanding the intricacies of medication combinations and how to adjust them according to whether you are stable, manic, or depressed, and

3. STABILIZING instead of over-sedating or over-stimulating.

We will be looking at:

9. The benefits of Wellbutrin (an antidepressant)

Remember: Medication is NOT the be all and end all of bipolar treatment options! 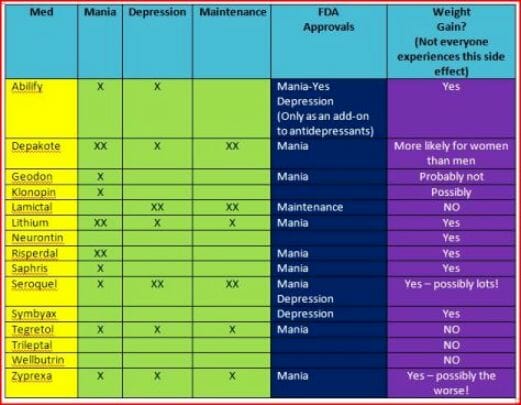 Latuda has come on the market since this table was created. Although it does have weight gain as a side effect, it is much milder than Seroquel or Zyprexa. Latuda is for treating bipolar depression – not mania or for ongoing maintenance so is probably best as an add-on to lithium or Depakote.

It is incredibly important for bipolar patients to find a physician that they are comfortable with and who is willing to tailor a medication regimen to their specific needs; this might require some trial and error.  Furthermore, it is important to augment medical therapy with psychotherapy.

In general, first line maintenance therapy for bipolar patients is the drug that remitted their acute bipolar mood episode.  Second line monotherapy medications that have the greatest amount of data to support them are: lithium, valproate, quetiapine, and lamotrigine.  Third line drugs tend to be aripiprazole, olanzapine, and risperidone.