What are genuine bipolar symptoms? So much information about the symptoms of bipolar disorder (manic depressive illness) is confusing, misleading, or contradictory. 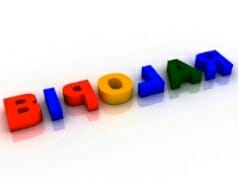 There is still a shortage of accurate and reliable information about bipolar disorder symptoms, despite much interest.

One of the biggest difficulties is in distinguishing bipolar from major depression.

In addition to the confusion between bipolar and severe depression, another common misdiagnosis is to mistake borderline personality disorder for bipolar disorder.

Also, bipolar symptoms are easy to confuse with other disorders such as ADHD, or physical problems such as thyroid disorder.

Bipolar symptoms are more than feelings. They must result in behavior with substantial negative consequences.

Discover the real symptoms of bipolar disorder. Don’t be apart of the misinformed crowd who confuses bipolar with other illnesses and personality problems.

In some ways “bipolar” was easier to understand back when it was commonly known as “manic-depressive illness”.

This is because bipolar is all about mood swings. These are mood changes that are more extreme and pronounced then the usual ups and downs we all experience from day to day.

Symptoms of bipolar disorder: from National Institute of Mental Health (NIMH)
How extreme do these mood swings have to be? Psychiatrists use their professional handbook, the “Diagnostic and Statistical Manual of Mental Disorders” (DSM) in order to diagnose if mood changes that transition into depression and mania are serious enough to be symptoms of bipolar disorder.

Depression involves feelings of sadness and emptiness or a loss of pleasure or interest in things.  These feelings last most of the day, on most days for at least 2 weeks.  These symptoms are severe enough to negatively impact a person’s ability to work, participate in and enjoy relationships, overall be able to function and perform everyday life activities. 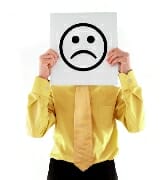 1. Feeling of sadness or emptiness.
2. Losing interest or pleasure in one’s usual enjoyments.
3. Changes in appetite (up OR down), and/or substantial and unplanned loss of weigh or weight gain.
4. Insomnia.
5. Excessive tiredness or sleepiness, and/or lack of energy.
6. Restlessness and agitation.
7. Reduced sex drive.
8. Lack of motivation.
9. Feeing worthless.
10. Feeling guilty about things you are not responsible for.
11. Indecision.
12. “Fuzzy” thinking, problems concentrating, or memory loss.
13. Thoughts of self harm or suicide.
14. Hallucinations.
15. Delusions.

The word “manic” is often thrown around quite casually, but for genuine bipolar symptoms, mania must have some very definite characteristics. Specifically, to meet a diagnosis of mania, the mood changes must last for at least a week, or be so severe that hospitalization is required.  These bipolar disorder symptoms cause significant disturbance to work, relationships and daily life.

Symptoms of bipolar mania include:

1. Exaggerated high opinion of oneself.
2. Beliefs that one has great talents or gifts that extend beyond reality.
3. Hallucinations.
4. Reduced need for sleep.
5. Talking more than usual.
6. Pressure to keep talking.
7. Skipping from one idea to the next so there is a fragmented flow of thought.
8. Racing thoughts.
9. Easily distracted but some short periods of very focused attention.
10. Feeling restless and agitated, for example finding it hard to sit still.
11. Increase in goal directed activities, related to social, work, school, or sexual pursuits.
12. Excessive engagement in pleasurable activities without thought to their distressing consequences, such as big spending sprees, gambling, sexual indiscretions, and/or poor business investments. 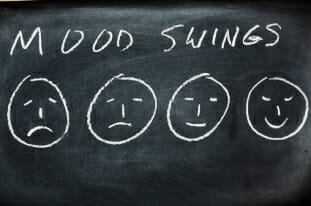 Hypomania is a milder form of mania, and may result in a diagnosis of Bipolar Type II or “soft” bipolar.

The symptoms of bipolar mania and hypomania are the same – what is different is the DURATION and INTENSITY of the bipolar symptoms.

In hypomania, the symptoms must last for at least 4 days and are not serious enough to require hospitalization.

And remember, bipolar symptoms are all about mood swings – there must have been BOTH depression AND mania/hypomania, although there are cases of Bipolar I Disorder where the person only experiences mania (and not hypomania or depression). In Bipolar I, many people do go through the depressive episodes either before or after a manic or hypomanic episode, but there are cases of people who do not experience depression. In this case, the mood “swings” is characterized by the person’s “normal” or “typical” mood state in between episodes followed by the shift or “swing” to a manic episode.

SEXUAL ISSUES are amongst the most common, but least discussed symptoms possibly due to the shame/embarrassment caused by this symptom, as well as the potential for it to be harmful or dangerous to the Bipolar person and others:

Sometimes we need to consider outward manifestation of bipolar as well as a sufferer’s own subjective, internal states.

Regardless of what someone may report their mental and emotional state to be, valuable insight into their symptoms can be gained if you know some basic information about Bipolar Behavior.

HINT: PLEASE do read about this and do not base your image of bipolar symptoms on what you have read about Charlie Sheen.) 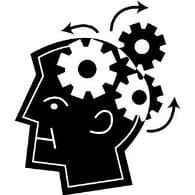 This is a tricky area because sometimes cognitive problems such as “fuzzy thinking” or memory loss are due to the side effects of bipolar medications.

Also, many people with bipolar disorder are very gifted and often believe that mania, or at least hypomania, enhances their intellectual or cognitive abilities.

However, there is also evidence to suggest that with bipolar, cognitive problems can be a pretty typical symptom.

This may be anything from being easily distracted, to mental fogginess, memory problems, or becoming easily confused.

There is a difference between symptoms that MAY occur in bipolar and the symptoms that are specified in the criteria for the diagnosis. Foggy thinking alone is not a reason to suspect bipolar – grandiosity and racing thoughts are.

The evidence about cognitive bipolar symptoms can be conflicting. For example, one study observed poor performance in all groups of bipolar people when compared to “healthy” subjects with tasks such as verbal recall and executive functioning.2

Other research has shown that once stable, folks with bipolar do not show cognitive impairment.

Also, rather than causing harmful cognitive effects, some bipolar medications such as lithium have neuro-protective properties and can help the brain regenerate grey matter and protect against problems such as memory loss.

Physical effects and symptoms of bipolar

Sometimes bipolar symptoms are caused, aggravated, or exacerbated by other underlying medical conditions such as thyroid problems.

Also, people with bipolar disorder are twice as likely to die prematurely from medical conditions such as heart disease and stroke than are members of the general population.

Even scarier, they are three times more likely to develop diabetes, and some diabetes symptoms can look like bipolar symptoms.

Is there ANY difference between the symptoms of manic depression and those of bipolar?

Generally we are simply told that “bipolar disorder” is the new name for what we used to call “manic depression” or “manic-depressive illness”.

Bipolar Disorder symptoms can be confusing to differentiate especially when determining whether a person has Bipolar I or Bipolar II. Bipolar II could be seen as being a bit “simpler” to remember because for Bipolar II Disorder, the person must have had a current/past hypomanic episode and a current/past major depressive episode, but never a manic episode. If a person has even one manic episode throughout their entire life, that person’s diagnosis will always be Bipolar I Disorder, even if they have a manic episode one time in their mid-20s, for instance, when they first were diagnosed and/or hospitalized for Bipolar Disorder. You can probably imagine that it can often be difficult to determine if a manic episode has occurred because if there was no hospitalization and no outpatient psychiatric or therapeutic treatment, we must rely on the client’s and/or family’s self-report. Typically, however, a manic episode is so severe, and the symptoms are so marked, that people should be able to describe it to the extent that the clinician can acknowledge that it was (or was not) a manic episode.

The primary purpose of differentiating between the two types of Bipolar Disorder and whether the person experiences mania, hypomania, or depression is to monitor the client’s symptoms and recommend the most effective and comprehensive treatment methods.