Thousands of people still search for information on Kurt Cobain and manic depression, years after his death.

What is it they are really looking for?

Kay Redfield Jamison, Professor of Psychiatry at the Johns Hopkins University School of Medicine and leading US expert on bipolar, selected Kurt as the poster boy for a 2004 study of bipolar disorder (manic depression) and creativity.

Of course Kurt’s case is complicated by the presence of both mental health AND substance abuse issues.

Some people believe that Kurt was manic depressive because he wrote his famous song Lithium – the most important drug in treating this disorder.

However, Lithium was an early Cobain song, written some years before Nirvana were major stars or Kurt’s most serious problems developed. There is no evidence that Kurt ever took lithium and it is unlikely that he had already received a bipolar diagnosis at the time. 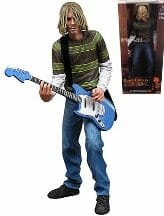 In an interview with Chris Morris of Musician, Kurt said the song was about: “breaking up with girlfriends and having bad relationships, feeling that death void that the person in the song is feeling – very lonely, sick.“

This interview contains the following question and answer:

Q: Did Kurt have other mental health problems besides general depression?

A: Kurt was diagnosed at a young age with Attention Deficit Disorder [ADD], then later with bipolar disorder [also known as manic-depression]. Bipolar illness has the same characteristics as major clinical depression, but with mood swings, which present as rage, euphoria, high energy, irritability, distractibility, overconfidence, and other symptoms. As Kurt undoubtedly knew, bipolar illness can be very difficult to manage, and the correct diagnosis is crucial. Unfortunately for Kurt, compliance with the appropriate treatment is also a critical factor.

Bev Cobain is a registered nurse with a background working in mental health. This background, combined with the tragic loss of Kurt, have led her to become an expert and energetic activist for suicide prevention. Her comments that Kurt was actually diagnosed provide strong evidence for linking Kurt Cobain and manic depression.

The various biographies on Kurt mention his depression, and claim he received psychiatric care as well as drug counseling and rehab, but none refer to Kurt as specifically bipolar.

Kurt was depressed for much of his life – as a child he would seek sanctuary in his bedroom closet.

Kurt’s periods of withdrawal and lethargy have been extensively chronicled elsewhere. His depression is not disputed and so I won’t rehash a lot of details here.

Since his youth Kurt spoke constantly of suicide and an early death. “I hate myself and want to die” was Kurt’s personal mantra – he repeated it constantly in conversation and in his journals, hurled it at journalists during interviews, and even intended using it as an album title.

However depression is only one half of the story of Kurt Cobain and manic depression.

The other half of the story of Kurt Cobain and manic depression is, of course, mania. Mania can be expressed in many different ways, for example the rage, euphoria, high energy, irritability, distractibility, and overconfidence listed by Bev Cobain, and illustrated in hundreds of incidents documented in the Cross biography Heavier than Heaven.

Kurt’s music and lyrics display incredible emotional complexity – a far richer canvas of moods than simple depression or nihilism. According to bipolar expert Dr Kay Redfield Jamison in From Napoleon to Kurt Cobain: Cultural Legends: “As music is a language communicating moods, the emotional intensity of bipolar disorder apparently can add depth to musical expression.”

What other clues, aside from the oft noted link between bipolar disorder and creativity, indicate a connection between Kurt Cobain and manic depression? Where can we see mania as well as depression?1

– High energy: Many people frequently complained of Kurt’s laziness but this oscillated with periods where he was highly productive, either in the studio or song writing at home, and his frenetic energy on-stage is legendary.

– Rage: Kurt frequently wrote highly emotional, angry letters to or about people he felt had wronged him. He would invariably demolish stage sets and hotel rooms – sometimes done in high spirits and sometimes in a fury. Either way it shows the impulsiveness and lack of inhibition characteristic of bipolar people

– Writing: Since early childhood Kurt wrote and drew prolifically. His pressured writing and inordinate production of written declarations, poetry and artwork are highly typical of mania.

A definite picture of Kurt Cobain and manic depression emerges from the above.

Finally, there are the mood swings and erratic behavior such as Kurt’s much publicized escapes from rehab, his eccentric behavior with his numerous pets, and bizarre preoccupations with things like flipper babies. This is not intended as an attack on Kurt – just an attempt to list the many ways we can connect Kurt Cobain and manic depression.

Not convinced Kurt was bipolar? See the bipolar test

There was mental illness on both sides of Kurt’s family tree.

Kurt’s family tree looks like something out of a textbook on mental illness. Many of the Cobain men abused alcohol and some were violent. Depression seems to have run rampant. Kurt definitely came from a bipolar family.

Sadly, Kurt was not the first Cobain to kill himself.

When Kurt was 12, his great-uncle Burle, brother to Kurt’s grandfather Leland Cobain, shot himself in both the stomach and head with a pistol. Only a year earlier, another of Leland’s brothers had also died. Ernest Cobain suffered a fatal aneurysm at 57, after falling down the stairs drunk. This was not officially a suicide, but Ernest had recently received stern medical advice that he would die if he did not stop drinking. Not long after, Leland’s only remaining brother, Kurt’s great-uncle Kenneth, shot himself in the head.

On his mother Wendy’s side of the family there was also mental illness. When Wendy’s mother Peggy was only 10, her father (Wendy’s grandfather and Kurt’s great-grandfather) stabbed himself in front of his family. He was committed to a mental hospital and completed his suicide two months later by ripping open his stab wounds when the hospital staff were not watching.

As if this was not enough, when Kurt was in the eighth grade, he and two friends discovered the corpse of a local boy who hanged himself
outside the local elementary school.

It is not surprising that even as a young teenager Kurt was joking with his friend Rod Marsh that he had “suicide genes”.

If you consider this material on bipolar suicide, Kurt had around 8 of the known acute risk factors for suicide and only one of the preventative factors – children in the home and a sense of responsibility to family.

However, because Kurt’s feelings of shame and guilt, as expressed in his suicide note, were so strong, this preventative factor was weak in Kurt’s case.

Based on the note, it was overridden by delusional guilt (a common acute risk factor), as Kurt writes of his conviction that Frances and Courtney will be better off without him.

Kurt’s great-grandfather committed suicide in the same Washington mental hospital that actress Frances Farmer, who was manic-depressive, was treated in. The wedding dress worn by Courtney Love when she married Kurt had once belonged to Frances Farmer. 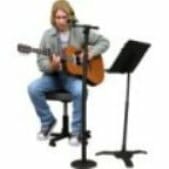 I am well aware I have only scratched the surface of trying to describe the connections between Kurt Cobain and manic depression.

My main sources were the Charles Cross biography Heavier than Heaven, my hundreds of hours spent listening to Nirvana, and of course Kurt’s own Journals – the incredible collection of Kurt’s writings and drawings from the late 1980s until his death in 1994, published by Riverhead Books in November 2003.

The topic of Kurt Cobain and manic depression could easily sustain a whole website – not just a single page. What strikes me most as a bipolar person is the way Kurt used not just his music, but his other art and mainly his stories – often not literally true but emotionally resonant allegories – to express his emotional pain and confusion.

The complications arising from his heroin addiction and other self-medication make it hard to separate out all the strands of Kurt Cobain and manic depression.

His story is a cautionary tale but is also inspiring in terms of Kurt’s unique powers as a communicator.

There is a lot of drivel on the Internet about Kurt, about the circumstances of his death, and about Kurt’s widow Courtney Love. My research, my regard for their art, and my own experiences of bipolar tell me that both Kurt and Courtney are unusually gifted human beings, entitled to respect, privacy and dignity.

His fans should learn about Kurt Cobain and manic depression, and Kurt should rest in peace.

Kurt deserves his due, not just as a wildly popular music star, but as an incredibly gifted communicator and a great artist in a range of mediums, including his writing and drawing.