In 2006, a British mental health charity defended a statue it commissioned of Churchill in a straitjacket, after the statue sparked a public outcry.

Some people were outraged by the attempt to link Winston Churchill and manic depression (bipolar disorder). The charity claimed it was trying to project a more positive image of people with mental illness. According to a spokesperson:

“The message we want to portray is that it is possible to recover from mental illness and overcome it and be successful – because Churchill is an example of someone who was able to do that.”

In fact, some believe that it was more complex than that – that Sir Winston’s achievements were because of his bipolar – not in spite of it. In a sparkling essay in his book Black Dog, Kafka’s Mice, and Other Phenomena of the Human Mind, psychiatrist and historian Anthony Storr wrote:

“Had he been a stable and equable man, he could never have inspired the nation. In 1940, when all the odds were against Britain, a leader of sober judgment might well have concluded that we were finished.”

“I don’t like standing near the edge of a platform when an express train is passing through. I like to stand right back and if possible get a pillar between me and the train. I don’t like to stand by the side of a ship and look down into the water. A second’s action would end everything. A few drops of desperation.” – Winston Churchill (1874-1965)

Many believe Sir Winston coined the expression “black dog” himself, but this expression is actually much older.

Churchill made frequent references to his depression, which he called his “black dog”.

Churchill’s depressive periods tended to be intense and prolonged. Sometimes they were connected with traumatic external events such as his dismissal from the Admiralty after the Dardanelles disaster in WWI.

Other times they could not be attributed to such outside causes, fitting the classic profile of serious unipolar or bipolar depression. His depressions came and went throughout his long and remarkable life, and commenced in his youth.1

Churchill seemed to be aware that his depression was a medical condition. In 1911 a friend of Churchill’s claimed to have been cured of depression by a doctor. Churchill wrote about this with some excitement in a letter to his wife, Clementine:

“I think this man might be useful to me – if my black dog returns. He seems quite away from me now – it is such a relief. All the colours come back into the picture.”

However, Churchill was writing at a time before the development of effective medication, when the main medical approach to mood disorders was psychoanalytic.

Churchill’s doctor, Lord Moran, wrote a memoir about his famous patient, emphasizing the black dog – it describes plenty of symptoms but no treatment.

When Churchill was almost 80, Dr Moran prescribed some speed to give Sir Winston enough of a boost to make a final speech in Parliament.

Other evidence of mania that connects Winston Churchill and manic depression includes:

– Belligerence: he was combative in his personal relationships and openly exultant about war, describing his enjoyment of WWI “this glorious, delicious war” and stating “war is the normal occupation of man”. In person, many found him sarcastic and overbearing, and he was notorious for monologues that could last for up to 4 hours or longer.

– Spendthrift: he had persistent money troubles due to his extravagance, gambling, and lifetime refusal to plan or monitor his finances.

– Abnormal energy: his preferred working day began when he awoke at 8am and ended sometime between 2-4:30am – this has been thoroughly and bitterly documented as he expected his staff to fit in with this.

– Lack of inhibition: he worked from his four poster bed in the mornings, attended by colleagues and secretaries. One General described being summoned to a meeting a 4am where Churchill appeared dressed in his bathrobe. He often distressed his staff by meeting with them while dressed in nothing but the pale pink silk underwear that he had personally tailored. He would even walk around his house completely undressed or insist on conducting meetings from his bathtub.

– Prolific writing: at his death Churchill left 15 tons of personal papers. Most of his income was derived from his writing, and he wrote countless articles, and 43 book-length works in 72 volumes.

– Grandiosity: he was notorious for his disdain for other people and their opinions, his unwavering belief in himself as a great man, his early sense of self-importance and grand destiny, and his many histrionic actions and speeches.

PLEASE NOTE that none of the above is intended to diminish the legacy of this historical giant. Churchill’s courage and leadership during the darkest days of WWII have long made him one of my personal heros. The above list is based on the historical record. It is presented here to show the convincing evidence that ties together Winston Churchill and manic depression. Hopefully this will encourage other bipolar people to study his story and to learn and be inspired. 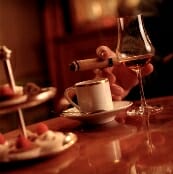 Does his alcoholism provide further evidence of a link between Winston Churchill and manic depression?

Research has demonstrated very strong links between mania and substance abuse. Studies show that bipolar people are much more likely than depressed people or the population in general to be alcoholic. Further, alcoholics are more likely than members of the general population to be bipolar. Do manic depressives self-medicate this way to gain relief from the irritability, agitation and restlessness of mania?

Churchill’s favorite drink was whisky and soda, starting soon after breakfast. He is on record as having once drunk 11 of these during a single meal. When Churchill traveled to the US during Prohibition, he obtained a doctor’s note to certify that regular consumption of alcoholic spirits was necessary to his health. Churchill’s heavy drinking was no secret and even President Roosevelt complained Sir Winston was drunk half the time. Many could conclude this was alcoholism and another connection between Winston Churchill and manic depression.

There is a whole section on Winston Churchill and manic depression in the book Moodswing by Ronald R. Fieve, M.D., Bantam Books 2nd revised edition, 1997. The author, Dr Fieve is a psychiatrist who specializes in bipolar and who pioneered the use of lithium in the US in the 1970s. Dr Fieve has interviewed Sir Winston’s only son, Randolph Churchill, and made a detailed study of Churchill’s psychological profile.

Dr Fieve has made a retrospective diagnosis of Sir Winston as Bipolar II – but with a twist! In Moodswing Dr Fieve introduces a new label – Bipolar IIB – the “B” is for “beneficial”. This is his term for the form of manic depression in which the bipolar person uses their highs to benefit themselves, their family and society. Other politicians who Dr Fieve classifies this way are US Presidents Abraham Lincoln and Theodore Roosevelt. Moodswing is available from Amazon for $7.99.

Dr Fieve is not the only expert to link Winston Churchill and manic depression.

NAMI (National Alliance on Mental Illness) include Dr Storr’s quote on Winston Churchill and manic depression on their website about how People with Mental Illness Enrich Our Lives.

This has information about famous people throughout history who have had a serious mental illness.

The Discovery Channel’s feature Altered Statesmen suggests that along with his depressions, Churchill also experienced intensely creative ‘up’ moods, to the point that psychiatrists would say is cyclothymia.

Want to learn more about the relationship between mental illness and high achievement? Discover other famous people with bipolar disorder.