Why would you need a Bipolar 2 Test? Because both the treatment and symptoms of the two different types of Bipolar Disorder are different.

Bipolar Type I is often treated with different medications than those for Bipolar Type II, so testing to pinpoint your precise condition is very important.

A Bipolar 2 Test is especially important if you suffer from depression, but experience hypomania rather than full blown bipolar mania.

The best test for Bipolar Type 2 is probably either the Mood Disorder Questionnaire (MDQ) or the Bipolar Spectrum Diagnostic Scale (BSDS).

If you want a basic self-screening test, see our free online bipolar test.

The MDQ is popular and useful because it is brief and it is based firmly on the diagnostic criteria of bipolar symptoms from previous edition of the DSM (i.e., the DSM-IV, which is the authoritative manual used by expert psychiatrists). The MDQ can be completed and scored by patients independently. 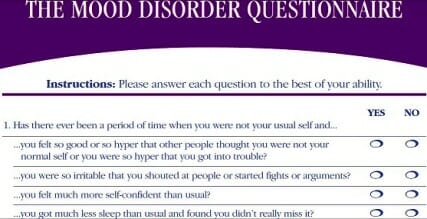 However, before we go ahead and actually take any kind of bipolar disorder test, it is important to make something very clear – the two tests provided here are BIPOLAR SCREENING TESTS – NOT DIAGNOSTIC TESTS!

A screening test identifies possible symptoms and alerts you to the need for a follow-up in order to get a clearer, more definitive picture. Formal diagnosis depends on the results of this detailed follow-up. Bipolar self-tests are only for screening and you need to have a more extensive face-to-face consultation with an expert in order to be formally diagnosed.

The tests provided here are for screening only. A positive screen does not mean you have bipolar disorder – just that you should follow-up with a qualified mental health professional!

As long as you understand that limitation, a widely used Bipolar 2 Test is the The Mood Disorder Questionnaire (MDQ) from the Depression and Bipolar Support Association (DBSA).

It only takes about five minutes to complete and it can be scored immediately as well. The interesting thing about this bipolar symptoms test is that it is screening for a range of different types of bipolar disorder.

This means it is useful as a specific Bipolar II Test.

However, lately there has been some criticism stating that the MDQ may not be sensitive enough or accurate enough for widespread use. In 2013, researchers in Rhode Island found that the MDQ test often misdiagnosed patients as bipolar when their real diagnosis should have been Borderline Personality Disorder. This is quite a problem as the treatments for Bipolar Disorder and Borderline Personality Disorder are quite different.

Another popular bipolar test when screening for Bipolar Type 2 is the Bipolar Spectrum Diagnostic Scale, also known as the BSDS.

This test was developed by Boston psychiatrist, Dr Ron Pies, and has been evaluated by Dr S. Nassir Ghaemi, Director of the Bipolar Disorder Research Program at Emory University.

It is strongly endorsed by Dr Jim Phelps in his book Why am I still depressed? Recognizing and Managing the Ups and Downs of Bipolar II and Soft Bipolar Disorder, (McGraw-Hill 2006).

The BSDS is a popular bipolar test amongst those, like Dr Phelps and Dr Ghaemi, who believe in the idea of a Mood Spectrum or Bipolar Spectrum. This represents a growing trend to reject the traditional categories such as Bipolar I and Bipolar Type 2 in favor of a sliding scale approach. This is very helpful in diagnosing people who do not display all the classic bipolar
symptoms. 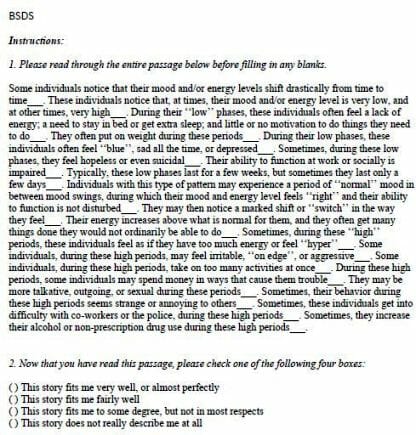 The Bipolar Spectrum is a very important concept because the majority of bipolar people are undiagnosed or misdiagnosed – often for many years. This is very unfortunate and dangerous.

Failure to diagnose correctly does not just mean the tragic consequences of missing out on treatment – frequently it leads to people receiving drugs that actually trigger mania and makes the disorder worse.

It seems likely that the BSDS will be increasingly accepted. In the classic textbook Manic-Depressive Illness: Bipolar Disorders and Recurrent Depression by Drs F.K. Goodwin & Kay Redfield Jamison (2nd ed, Oxford University Press, 2007), the BSDS is discussed and described as “promising”.

(However, note that further validation and replication of the BSDS is still advised.)

This new and increasingly popular free bipolar disorder test can be taken here:

The BSDS is preferred as a specific Bipolar 2 Test as it is thought to be more effective for detecting the more subtle forms of the disorder. This test is not as good as the MDQ for a clear YES/NO answer, but again is intended to pick up milder forms across the full bipolar spectrum.

Take the BSDS online and score it for free.

As you can see, a bipolar self-test can be completed online, based on traditional paper and pencil questionnaires.

In the simplest form you are asked if you experience the bipolar symptoms described in the Diagnostic and Statistical Manual of Mental Disorders, Fourth Edition (DSM-IV) – the textbook psychiatrists use as a definitive source of diagnostic and treatment standards for many mood disorders and other mental health problems. The DSM has since been updated to a new edition (i.e., the DSM V), but the diagnostic criteria for Bipolar I and II have not changed significantly.

This type of bipolar disorder test can tell you everything or nothing!

Obviously it is crucial that you have excellent insight into your own emotions and behaviors and are able to be honest and accurate in your answers.

As you can see from the two tests we have provided here, testing for Bipolar Disorder involves simple and straightforward questions – not analyzing ink blots or other complicated, abstract psychoanalytic processes.

Test is not enough

HOWEVER, USE OF THE MDQ, BSDS OR ANY OTHER BIPOLAR 2 TEST ALONE IS NOT ENOUGH!

PLEASE see a skilled and licensed psychiatrist, psychologist, or other mental health professional with experience in treating mood disorders to obtain a diagnosis!1

Psychological tests and assessments are excellent sources that can be used to support a diagnosis, clarify any diagnostic questions, or expose symptoms/concerns that the client and/or family members/loved ones are having difficulty explaining or expressing. During a clinical interview, also known as a diagnostic evaluation, the mental health professional will ask the client dozens of questions about his/her background history, presenting problems, symptoms, family, occupational, and social history, as well as information about activities of daily living. The diagnostic evaluation is long, in-depth, and very personal, but the purpose is to get a thorough history of the client.

This is just one example of the importance of diagnostic tests and assessments, but any responsible and ethical clinician will tell you that you cannot and should not base a diagnosis simply on the results of a Bipolar assessment. The clinician should always meet with the client and conduct a clinical interview. Diagnosing Bipolar Disorder and differentiating between the two types of the disorder is often wrought with uncertainty, as there is a lot of overlap of symptoms; therefore, an experienced and competent clinician will always be thorough and conduct a full and comprehensive assessment.